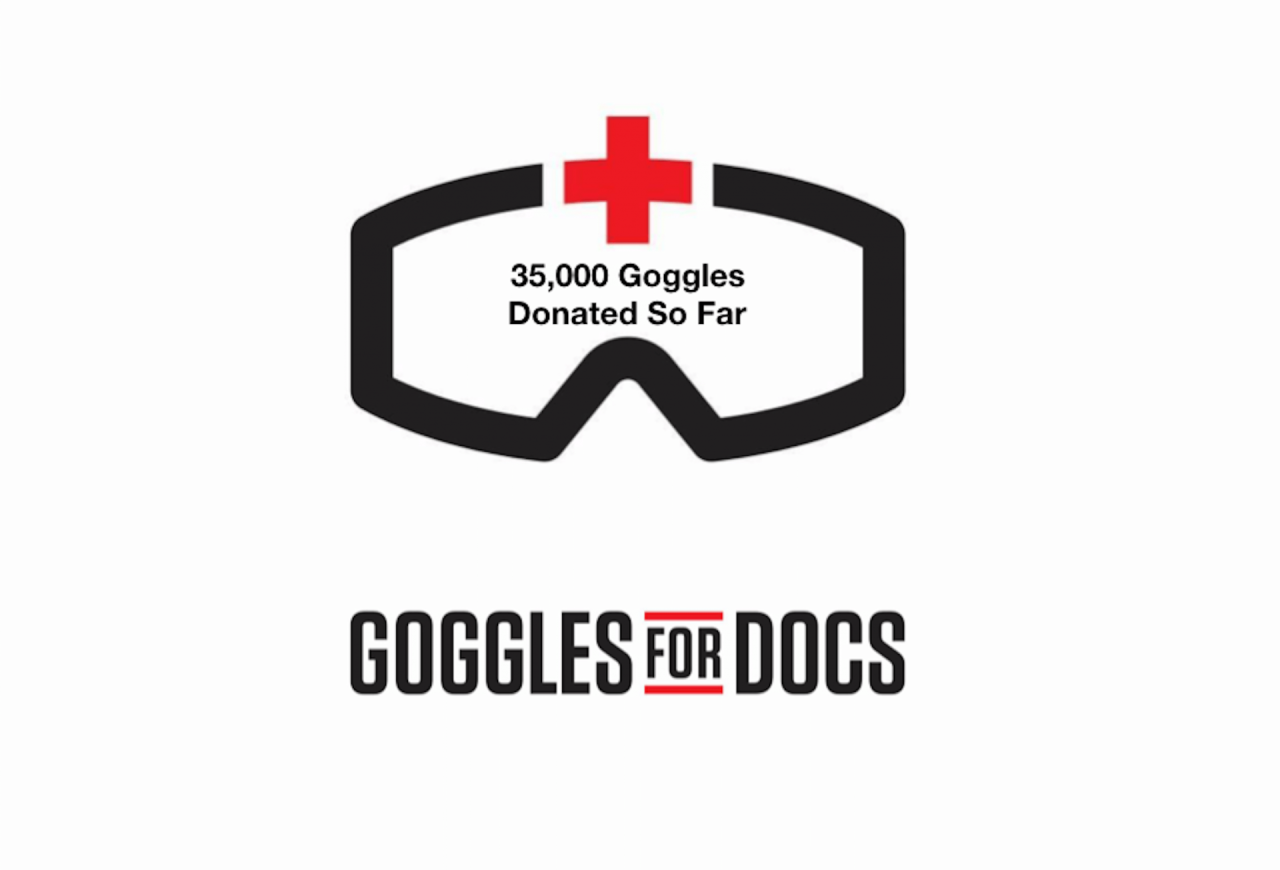 THE VIRAL TRAJECTORY OF GOGGLES FOR DOCS

On the night of March 11, Jon Schaefer read an article about the spread of COVID-19. He turned off the lights and went to sleep. "Five minutes later, I woke up and knew what we had to do," he said.

Schaefer, who runs Berkshire East (the ski area in northwestern Massachusetts that his family has owned or operated since 1977) and Catamount, a sister ski area, shut down on March 12. They were the first ski areas to close in the Northeast and possibly the country, due to the pandemic.

"I'd been talking with a friend of mine who is the anesthesiologist who intubated the first person to be diagnosed with coronavirus in Vermont. My wife is a physician's assistant at Berkshire East Medical Center. I knew it was the right thing to do," he said.

On Saturday, March 28 another light bulb went off in Schaefer's head. "A friend of a friend, who is a physician in New York emailed me asking for ski goggles for the health care workers there. That email went out to six of us. Within 20 minutes, I was getting that same email forwarded to me from other friends. All I could think of is, jeez, this doctor is going to get 10,000 pairs of Smith goggles sent to his house and that's not a very efficient use of resources."

One of the messages that came to Schaefer, a former Middlebury College Div. 1 ski racer, contained a message from Trevor Crist, the CEO of Inntopia – a Stowe-based ski resort software company and his VP of Marketing, Gregg Blanchard, offering whatever help was needed in getting things more organized.

"I knew the company, but had never spoken or heard from these guys before," says Schaefer. "On a return trip from a local grocery, I started fleshing out a website on a phone call with them." The site went online at 2 pm on Sunday." All the while the word was spreading at the hospital level. "Even as we were on the phone building this, three more hospitals signed up," Schaefer said.

As of Monday evening, March 30, almost 2,000 used and new goggles were being sent to hospitals in seven states and requests to organize have come in from hospitals as far away as New Zealand and Spain. On Monday night, 10 more hospitals signed up, with a stated need of nearly 1,000 more goggles.

By April 5, more than 12,400 goggles had been donated in 31 states and the needs of hospitals in 12 of those state completely filled. Burton alone donated 1300 pairs, swapping out mirrored lenses for amber lenses.

A front page article in The New York Times helped showcase how the goggles were being used: "Dr. Rosenberg passed out masks with a face shield — "they're clean, save them, they're gold" — to staff members before they entered the man's room. Dr. Rosenberg put on a sterile gown and ski goggles, which he said he preferred because they didn't fog up."

"I'm not sure how it works on their end, but doctors have told me two things: first, that they need goggles as COVID-19 can be transmitted with, say a direct cough to the eyeball, and second, that they can take care of disinfecting and distributing them," Schaefer said.

While Schaefer's wife is not currently wearing goggles as her hospital has adequate supplies of eyewear, Schaefer says that Berkshire Medical Center has put in an order for 300 and their need was met by the public by 2:00pm Eastern – with a large contribution, 217, coming from Uvex.

"I didn't wake up this week thinking I was going to be the COVID Goggle Guy — we have a lot to take care of at our businesses now too," says Schaefer. "It was just one thing that we as a ski industry could do to help."