Paula Moltzan Is Off To Beijing! 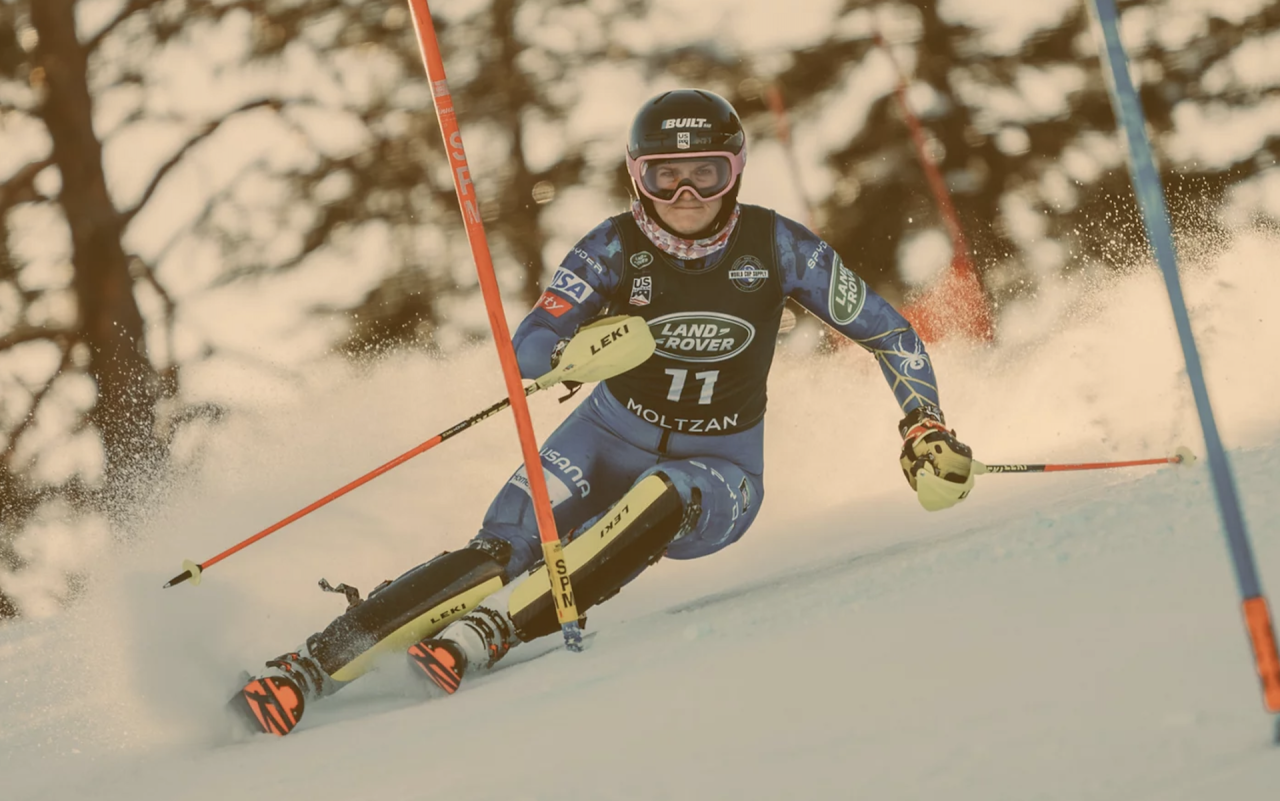 A friend of Berkshire East and Catamount, and now yours too!

From my seat as an operator of ski areas, I've spent the better part of 15 years trying to get 6 inches of snow made on mountains that had a mile of ice on them for the better part of the last 100,000 years. An effort that is challenging, irrational and phenomenal all wrapped into one. In that role, I have gotten to meet many people, done many things, and been part of multiple amazing communities. I have written to you about many topics in that time, but none have matched the pride and honor that I feel about the topic and people below.

One of the highlights of being a father and watching your kids grow up is watching them learn and be influenced positively by the things and people that they meet and see.

My family has been blessed to have Paula Moltzan and her fiancé Ryan Mooney in our lives. Paula, or Miss Paula as my daughters know her, arrived in the spring of 2018. She moved to Charlemont to work at her (then-boyfriend Ryan's) family rafting business, Crab Apple Whitewater. Ryan, a great (Berkshire East trained) ski racer in his own right, was then attending UVM, where he met Paula, and then began dating Paula, a racer on the women's team.

That spring, Paula, offered to help my wife Maria and me with our kids during her sophomore summer. Thankfully, we said 'Yes' and their little lives will never be the same. Immediately, I came home to the kids running obstacle courses, being timed racing around the house, laughing, and thriving with all of Paula's energy and positivity. At the time, the girls were still napping every day. Paula would work out in those quiet times, available to them if needed, but focusing on dryland training in her first year with no summer skiing in a long time. That 2018 summer without skiing for the former Junior World Champion was a little crazy because athletes at that level don't take that much time off without being injured. Especially for an elite college athlete, who had just printed her ticket back to the World Cup by winning the Nor-Am finals that spring.

Skipping past many happy days where my kids bonded with their new friends and to the deep fall at the 2018 Killington World Cup. On a wet, foggy morning, Paula had launched from a near last place start position to the 28th place after the first run. This position secured her an early start position for the second run. Despite 10,000 spectators, the start house of a World Cup in your college's backyard can be a lonely, pressure-packed place. Particularly if you've had 50+ days of babysitting, a bunch more raft guiding, and only 5 days of skiing at a western ski camp under your belt.

But something changed in that moment, as the weight of expectations fell away and the joy of the moment took over. She was excelling by taking a new approach to the sport, with a new partner, down a very familiar course.

Eschewing any limitation and skiing without pressure and with a newfound approach to the sport, Paula crushed her opportunity and placed 4th on the run. https://videos.usskiandsnowboard.org/snowboardinged/detail/videos/environment-and-motivation/video/5971373897001/paula-moltzan-2018-killington-cup---sl-run-2?autoStart=true Stamping her ticket to the rest of that winters World Cup, and an established spot on the US Ski Team.

Since that moment, she hasn't looked back. On February 4, 2022, Paula will walk into a stadium in China and her country and her sport under a global spotlight.

Paula Moltzan, originally from Minnesota, began racing at Buck Hill, south of Minneapolis. Along the way, she raced for the Vail Ski Club, the University of Vermont, and countless other courses, gyms, and mountains. She competed at the World Championships in 2015 at Beaver Creek, finishing twentieth in the slalom. A month later, she won gold in the slalom at the Junior World Championships in Norway.

She now calls Charlemont home. She is a lead raft guide for Crab Apple Whitewater on the Deerfield River in the summer. When duty calls, she skis, and when there is a moment, she trail runs, works out, and mountain bikes all over the mountains that we call home.

From 2018 to now, she has remained part of my girls' lives. She is an ever-present guardian and mentors them no matter where she is in the world. During the depths of COVID, when gatherings of a particular size were limited, my daughter couldn't have a party. Her one request was a special day of kayaking with Miss Paula on the Deerfield River and then to have her be the only guest at a simple outdoor birthday party (shhh, Ryan came too!). When she can take them, my kids spend their days with her running around Crab Apple, watched out for by the Mooney's and the family of staff at the base.

Being a ski area operator has many benefits. One of the few drawbacks is the need to be available for your businesses between mid-November and mid-April. But, as we know, this past fall was warm, and with that warmth came an opportunity to break free to bring my family to watch Miss Paula race at the Killington World Cup for the first time.

We arrived Friday night before the Saturday event. Guests of the organizers, we were lucky to be invited to the athlete's hotel for dinner. My 6 and 9-year-olds were giddy with excitement for the flashiness of the event and nervousness by walking into something they hadn't experienced. I led the way into the hotel and immediately recognized some folks from my ski racing days (it's a small community.) Lost in conversation, I heard screams and turned around to see Paula bear hugging the girls with the Mooney's in tow. My mom taught Ryan, Paula's fiancé, in the second grade. Friends from Charlemont, from Berkshire East, bonding at the Grand Summit Hotel, brought together by an incredible woman who has achieved everything she has set her mind to.

A special weekend was underway.

The Killington World Cup coincided with a winter storm, and the GS was canceled after a few racers, but the big event for Paula was the slalom. 10,000 spectators, live bands, and a hometown cheering section was out in full force. So too were my kids, overloaded with cowbells, Paula Moltzan flags, and surrounded by a scene that they had never seen before. It was made all the better because their friend was one of the stars of the day.

Sixth place after the first run, Paula faced a challenging second as the course set wasn't to her strength. Despite the challenging set, she skied fast. Leading all intervals until a slight bobble at the finish cost her some time. On the day that Mikaela Shiffrin won the race, Paula won many hometown hearts.

You see, Paula's story is an American trope, and the more you learn about it, the deeper you are moved by the effort. For Paula and Ryan, their role is the classic outsider underdog in a sport dominated financially by a handful of stars. They compete, relying on sponsors, donors, and the US Ski Team, but still self-fund a lot of their journey as they pursue their Olympic and World Cup dreams.

Why? Because somewhere between 2018 and 2021, they figured out a path that could make them successful and that the journey to China was one that needed to be taken together. Ryan is Paula's ski tech, coach, photographer, traveling partner, and fiancé. Unfortunately, there is no mechanism inside US Skiing to pay for his travel.

So they work and save, and day in and day out compete at the highest level of the sport as a couple in one of the most intense individual sports on the planet.

She and Ryan are the best version of American underdogs who have more than a fighter's chance at a medal. But, even if they don't, they will prove that the journey, the work, and the effort are the reward that is the more critical part of the story. They are kind, hardworking people who follow the dream for the sake of the dream. Battling COVID, injuries, and the struggle to self-fund 100% Ryan's expenses while representing our country in the best way possible.

But the best endorsement I can give is to tell you what superhuman role she occupies in my children's lives.

My ask of you is the following. Watch her race, and if you are interested in learning about Paula, please go to World Cup Dreams https://www.worldcupdreams.org/p-moltzan. The excitment will come to a head Tuesday night in the Olympic Slalom but will undoubtedly carry on into the future.

However, Paula feels at the start, and however her race finishes, she is the most valid form of an Olympian. For these games, she is an American hero who represents the best in athletics. She is a phenomenal role model for my girls and one-half of a fantastic couple.

Please share this article however you can. Let's send her to this event with the confidence of knowing that she has a whole team behind her that is as much in love with the journey and the dream, as she is.